Wireless CCTV Ltd (WCCTV), a world-leading manufacturer and developer of redeployable CCTV and surveillance systems, has announced building work is set to commence on its new company HQ.

The new premises will be situated on Kingsway Business Park, Rochdale, Greater Manchester, and the Company’s announcement follows several years of sustained growth both nationally and internationally.

The project represents a £2.5m investment for the Company, and will see a 12,000 square foot office, workshop and warehouse developed to facilitate growth as the workforce increases to meet worldwide demand. The Company’s employee numbers have grown from 19 in 2013 to 45 in 2015, with further growth anticipated.

WCCTV specialises in the transmission of live and recorded video, audio and alerts via mobile phone networks (4G, 3G, GPRS and Wi-Fi) to provide security and surveillance on a temporary, semi-permanent and long-term basis.

WCCTV’s current customer base includes Network Rail, National Grid, The AA, national and international construction companies and over 70% of the UK’s local authorities and police forces. The Company’s products have been utilised at major public events including the 2012 London Olympic Games, the 2014 Commonwealth Games and the 2014 Tour De France.

In the US, WCCTV has achieved Verizon Wireless Partner Programme status which will significantly increase its reach, allowing the Company to expand in the US alongside its existing UK and Middle East growth plans.

WCCTV’s continued growth in its key sectors in the UK and abroad has seen the Company increase profits by over 300% over the last three years, with the Company forecasting pre-tax profits in excess of £1m for 2014/2015.

Speaking on the new build, WCCTV’s Managing Director David Gilbertson said “Building our own premises on Kingsway Business Park is a direct reflection of the Company’s numerous successes over the past decade, and is a testament to the hard work of all those who have contributed to our growth.”

“Moving to our own larger premises will provide the ideal platform to support rapid growth and allow further investment in product innovation and world-class customer service which are the hallmarks of WCCTV.”

Speaking on the choice of location, Mr Gilbertson added “It was important to consider the needs of our loyal and skilled employees, many of whom are from the local area.”

“We’d like to express our thanks to Rochdale Development Agency for all their support in helping us secure a spot on Kingsway Business Park.” 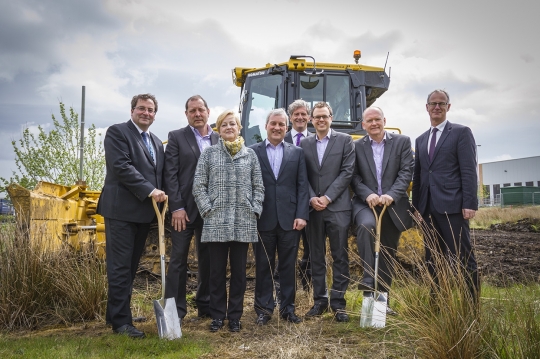